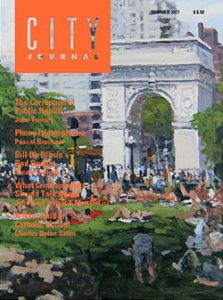 San Francisco, that most forward-looking of cities, has looked backward this summer. Half a century after an estimated 100,000 young Americans descended on the 20 blocks surrounding the intersection of Haight and Ashbury Streets to “tune in, turn on, and drop out,” the city has commemorated the birth of America’s counterculture.  A frenzy of nostalgia—exhibitions, concerts, conferences, lectures, installations, street fairs, walking and “magical mystery” bus tours—has celebrated all things “hippie.” More than 50 of San Francisco’s best-known institutions—the California Historical Society, de Young Fine Arts Museum, University of California at Berkeley, San Francisco State University, San Francisco’s ballet and opera companies, dozens of art galleries, and private merchants—paid tribute to 1967’s Summer of Love, iconic shorthand for a decade that not only shattered the city’s and the nation’s cultural and political norms but also gave birth to a countermovement that elected Ronald Reagan as California’s governor—and, in 1981, the nation’s president. In 1966, Reagan ran explicitly against student activism in Berkeley, which was then merging with the growing youth movement across the bay in the Haight-Ashbury neighborhood to create the hippie counterculture.