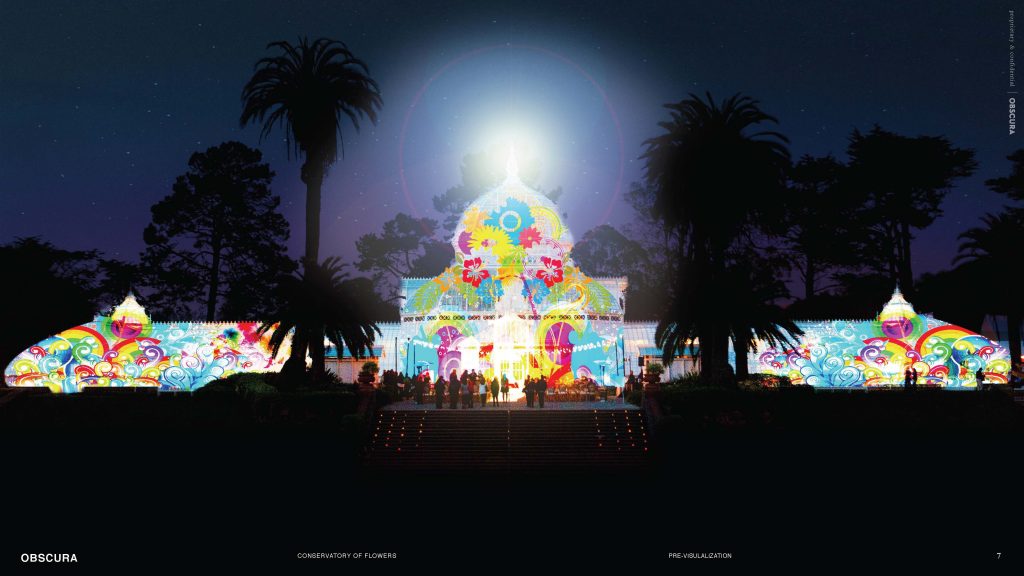 A special City-sponsored Summer of Love tribute kicks off on June 21, the summer solstice, in Golden Gate Park. The free concert features members of Jefferson Airplane, The Chambers Brothers, Moonalice, and others who will perform hits of the late 60s. The City will illuminate San Francisco’s landmark Conservatory of Flowers with a special Summer of Love light installation.

SAN FRANCISCO—The San Francisco Recreation and Park Department and the Conservatory of Flowers celebrates the 50th Anniversary of the Summer of Love on the first evening of summer, June 21, 2017, with a free Surrealistic Summer Solstice jam featuring over forty legendary musicians and the first public display of the light art installation that will transform the building into a canvas of elegant illuminated scenes every night through October.

“The Summer of Love symbolizes the free spirit of San Francisco and a generation of civic rebellion,” said former Mayor Willie Brown. “This is exactly why the City of San Francisco should take the lead in organizing this event to once again demonstrate the same fortitude our City has today, just as we did in the 1960s.”

The flower-powered celebration is free and open to all ages. It begins on John F. Kennedy Drive in front of the Conservatory at 6pm at the main stage where a non-stop line up of performers will revisit the iconic songs of the late 1960s. Produced by Dawn Holliday, under the musical direction of Dan “Lebo” Lebowitz, the almost four hour jam includes appearances by members of ALO, Ratdog, The Chambers Brothers, The Jefferson Airplane, Motherhips, Quicksilver Messenger Service, Tarnation, Katdelic, Terrapin Family Band, New Monsoon, Moonalice, and more. A variety of food trucks from Off the Grid will be available as well, and the Conservatory is encouraging attendees to wear tie-dye.

Then, at approximately 9:15pm, all eyes will be on the Conservatory for the Grand Lighting. Developed in partnership with San Francisco Recreation and Parks, the light art installation, initiated by Ben Davis of Illuminate, the nonprofit arts group behind The Bay Lights, together with Obscura Digital, a world-renowned creative studio specializing in large scale light-based art, uses gobo projectors to transform the all-white landmark with a series of exquisite scenes inspired by the rare tropical flowers within and the legacy of San Francisco’s flower children. The approximately 15 minute-long series of images includes spinning flower mandalas, animated butterflies, and much, much more.

The free public installation will be on view nightly from sundown until midnight throughout the summer, June 21 through October 21, 2017.
Space is limited at this event, and the public is encouraged to make a free reservation by visiting: https://www.eventbrite.com/e/surrealistic-summer-solstice-concert-and-grand-lighting-tickets-34076313170.

Public transportation is highly recommended, as parking is limited. John F. Kennedy Drive will be closed between Conservatory Drive East and West for the entirety of that day.

The Conservatory of Flowers and Recreation and Park Department is grateful to event sponsor Meyer Sound, also celebrating its 50th anniversary this year, for generously donating the sound system for the event. They are also grateful to the San Francisco Parks Alliance, the California Historical Society, media sponsors Alice Radio and San Francisco Magazine, and numerous civic leaders and organizations for supporting the event.

This event is presented by San Francisco Recreation and Parks Department, the Conservatory of Flowers, Illuminate, Obscura Digital, and the San Francisco Parks Alliance.

The Technology Behind the Illumination

Gobo projectors, chosen for their ability to withstand the rigors of a long-term installation, are one of the oldest forms of projection — akin to creating shadow puppets on a cave wall — though today’s gobos use full color. They were in heavy use during the heyday of the light show in the 1960s.

Images are printed on 23mm glass gobo lenses, and a light is shone through them to “project” on the surface. Obscura Digital had to go to extraordinary lengths to compress the large-scale work that the studio normally does with the advantage of cutting edge technologies on to static lenses that are about the size of a quarter.

To that end, Obscura Digital has pushed gobos farther than ever before by applying video projection mapping techniques to the glass slides. The Conservatory building was laser scanned to create a 3D model, on which the studio used image warping and masking to conform the images to the details of the architectural geometry. The final image printed on the gobo takes those considerations into account.

Each of the ten projectors has six gobo slots, so there are six themes made up of ten images each. These are mixed with classic built-in gobo effects like focus shift, rotation, filters, and background colors, as well as six LED floodlights to illuminate the building with a color wash.

The Conservatory of Flowers is a spectacular living museum of rare and beautiful tropical plants under glass. From Borneo to Bolivia, the 1,750 species of plants at the Conservatory represent unusual flora from more than 50 countries around the world. Immersive displays in five galleries include the lowland tropics, highland tropics, aquatic plants, potted plants, and special exhibits. Opened in 1879, the wood and glass greenhouse is the oldest existing wood and glass conservatory in North America and has attracted millions of visitors to Golden Gate Park since it first opened its doors. It is designated as a city, state and national historic landmark and was one of the 100 most endangered sites of the World Monuments Fund.

###
CALENDAR EDITORS, NOTE:
WHAT: Grand Lighting and Surrealistic Summer Solstice – A celebration of the 50th Anniversary of the Summer of Love on the first evening of summer featuring an outdoor concert with over forty legendary musicians and the first public display of the light art installation on the façade of the Conservatory of Flowers.