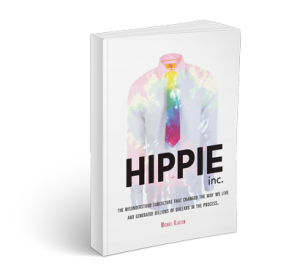 Americans’ collective memory of the Haight-Ashbury hippies centers almost exclusively on three things: drugs, sex, and rock & roll.  Missing is an awareness of what members of this notorious subculture ultimately contributed to the nation’s financial bottom line.  Over the last eight years, I have conducted an investigation designed to answer this very question using information gleaned from economic data and personal interviews with the very earliest hippies (most now in their seventies).  I have concluded that the Haight-Ashbury hippie movement was the most financially lucrative social movement in American history.

I believe that the commercial branch of the hippie movement (what I call, “Hippie, Inc.”) was born on November 27, 1965.  On that night, in an abandoned barn, a small group of people gathered for a seminal “drugs, sex, and rock & roll” event orchestrated by Ken Kesey.  Many recall Kesey as a ne’er-do-good, drug-addled rabble-rouser – most are surprised to learn that this prankster-king achieved what many business students only dream about: he was a self-made millionaire before the age of thirty.  Hippie, Inc. was born into and ultimately sustained by new wealth generated by a small group of highly ambitious and exceptionally bright nonconformists – long-haired entrepreneurs and innovators commonly mistook for rebellious slackers.  Before the night of November 27, 1965 was over, the first two hippie products (light shows and psychedelic posters) would leave the barn and start their steady ascent to corporate suites throughout the country. The psychedelic motif and distinctive hippie aesthetic it helped create would ultimately transform the American advertising and fashion industries and shape product development and design for years to come.

November 27, 1965 was just the beginning.  Five weeks later, on January 3, 1966, the first hippie shop opened on Haight Street thanks to two former Army veterans, Ron and Jay Thelin.  The Thelin brothers ignited a retail revolution that introduced an average of nearly one new business per week in the San Francisco Haight District for the next year-and-a-half.  A few blocks away, hippie Fred Rohe quickly transformed a traditional health food/vitamin store with a new merchandise line that included fresh, natural, and organic foods.  Rohe would eventually create the business template for today’s Trader Joe’s and Whole Foods and start an organic/natural food retail revolution that today is valued at over $100 billion.  (This figure does not include the value of organic/natural cafés, trade unions, and distribution centers – each originated by Rohe.)

Not all products introduced by the original hippies were immediate successes with Middle America.  Nancy Van Brasch Kamren drew from her grandmother’s yogurt and cottage cheese recipes to help feed members of the Haight-Ashbury commune that she and her boyfriend lived in.  Today, she co-owns (with Chuck Kesey, Ken’s brother) Nancy’s Yogurt which made $20 million in 2010 and is responsible for shaping a yogurt and probiotic market in the US that had grown to over $20 billion by 2013, most of it in the previous 15 years.  Hippie Jane Lapiner introduced Americans to whole grain artisan bread as a healthy substitute to bagged white bread.  Adopted by the likes of Au Bon Pain and subsidiary, Panera Bread, Jane’s “Digger Bread” was recognized nearly 50 years later by noted American baker and founder of the famed restaurant, Chez Panisse, Alice Waters.

Some hippie-conceived products were an immediate hit.  Judith Goldhaft employed the assistance of fabric designer, Jodi Palladini, to create an apparel design that would permit San Francisco’s homeless women to sell their very own fabric creations.  A hippie icon, the tie-dye shirt, first produced in the basement of a Haight-Ashbury church, has consistently sold into the millions of dollars year after year for nearly 50 years.  Judith was never interested in making a bundle, only to help, and today, she continues to devote her life to others through the non-profit organization that she and her partner, the late Peter Berg, founded.

Unlike Judith, some hippies were dedicated capitalists from the get-go.  A single mom, the late Laurel Burch sold homemade jewelry out of a fishing tackle box on Haight Street and eventually built a multi-million dollar international design company.  Another single mom, Jeanne Rose, is known today as the “godmother” of herbalism, essential oils, and aromatherapy.  A best-selling author and a highly sought-after speaker, Jeanne has helped shape the highly lucrative American health and beauty care industry over the last four decades.  Hippie retailers, Tsvi Strauch and the late Hyla Deer, employed both young women, Burch and Rose, to help stock their Haight Street boutique in 1966, and today this husband and wife team is responsible for the creation of an $11.5 billion men’s accessory fashion industry.

There are the “usual suspects” – Janis Joplin, Jerry Garcia, Grace Slick – and the billion-dollar music industry they helped kick-start along with promoters Chet Helms and Bill Graham, assisted by the LSD-dealing Augustus Stanley Owsley, III.  Those I interviewed who knew him well said that the “goofy Jerry” persona was a cover; Garcia was actually highly intelligent and an astute businessman ––one of the few early rockers to retain ownership of their music and publishing permissions.  “Owsley” is best known for selling an estimated 1.25 million doses of LSD during the Age of Aquarius.  Few are aware that before taking early retirement to Australia, he used his fortune to invest in hippie business start-ups, some of which went on to make millions of dollars and employ hundreds. The most popular of all, I nevertheless judge hippie music (and its LSD sidekick) a “middling industry” compared to the billions created by the sales of many other authentically hippie products, such as herbal tea, graphic tees, and, of course, marijuana, which today ranks in the top-3 largest crops in America (alongside corn and soy beans) at between $20 and $35 billion annually.

Fifty years ago, it was anyone’s guess as to what would be the commercial outcome of the hippie movement.  Today, the guessing is over.  Thanks to the efforts of about 40 hippie innovators and the products and ideas they came up with, I estimate Hippie, Inc. to be worth hundreds of billions of dollars and responsible for employing millions of Americans.  As we approach the 50th anniversary of the hippies, along with paying for Che-shirts, joss sticks, and do-rags, Americans may want to also pay rightful due to one of the most creatively productive generations of young American business innovators in our nation’s history.

Michael Klassen, Ph.D. is a marketing professor at the University of Northern Iowa and the author of Hippie, Inc.: The Misunderstood Subculture that changed the way we live and Generated Billions of Dollars in the Process, (Boston: SixOneSeven Books).