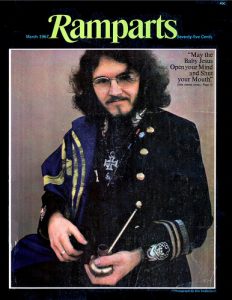 The 50th anniversary of Rolling Stone magazine has arrived, and not without fanfare. Joe Hagan’s biography of co-founder Jann Wenner appeared in October to stellar reviews, and earlier this month, HBO aired Alex Gibney’s documentary film about the magazine’s history. Wenner’s announcement that he was planning to sell his company’s stake in Rolling Stone also prompted a flurry of retrospective tributes.

Conceived during the Summer of Love in 1967, Rolling Stone was always a creature of the San Francisco counterculture. From the outset, the magazine touted Jefferson Airplane, the Grateful Dead and other San Francisco bands. Well before that, co-founder Ralph J. Gleason was featuring the Haight-Ashbury’s vibrant music scene in his San Francisco Chronicle column.