The Summer of Love had at least two dry runs. In 1965, dozens of young revelers gathered in Virginia City, Nevada, to spend the summer tripping on LSD, designing psychedelic posters, and playing music in frontier drag at the Red Dog Saloon. When they returned to San Francisco, these early hippies—the word appeared in print for the first time in September 1965—began hosting dances for up to 300 people.

The next summer, the Grateful Dead led a six-week amusement at Rancho Olompali, the rural property they rented in Marin County. Hundreds of visitors came to play music, swim in the large pool, and trip freely. They had fashioned a small but active arts and music community whose members also liked to dance. In the years before and after the Summer of Love, this community essentially invented the modern rock concert—that familiar combination of light shows, extended sets, freestyle dancing, and psycho-activity that still exists today. For some of these hippies, 1966 was the peak summer.

The Summer of Love differed from these dry runs because hippies had begun to attract significant media attention. Coverage swelled after the Human Be-In, whose turnout in Golden Gate Park exceeded expectations. Locally, Ralph J. Gleason had been writing about the music scene for the San Francisco Chronicle. His coverage was sympathetic and clearheaded, but after the Human Be-In, media reports took a different turn. City officials were bracing for a large—and largely unwelcome—influx of young people that summer. News stories focused on the prospect of increased drug traffic, public health and safety threats, runaways, and potential food riots.

Meanwhile, major magazines began to weigh in. One story came from Ramparts, the legendary San Francisco muckraker, in March. In “The Social History of the Hippies,” editor Warren Hinckle, a fourth-generation San Franciscan, offered an unflattering portrait of the Haight’s new arrivals. Gleason, who was also a contributing editor at Ramparts, resigned in a fury over the article’s inaccuracies and overall slant. He began working on a new magazine, Rolling Stone, whose premier issue arrived later that year.

Another high-profile story was Hunter S. Thompson’s “The ‘Hashbury’ Is the Capital of the Hippies,” which appeared in the New York Times Magazine in May. From his apartment on Parnassus Avenue, Thompson had observed the Haight at close range. Like Mark Twain a century earlier, he had arrived in San Francisco an obscure journalist and left a nationally known figure. More than Hinckle, who would help him create Gonzo journalism three years later, Thompson was sympathetic to the hippie ethos, and he later described San Francisco in the middle sixties as “a very special time and place to be a part of.” Yet for Thompson, the neighborhood’s drug culture was the big story, and his account places heavy emphasis on the Haight as a “dope fortress.”

Time magazine was the most critical of all—and reached far more readers. When “The Hippies” appeared in July 1967, it figured its subjects as, among other things, “dangerously deluded dropouts, candidates for a very sound spanking and a cram course in civics—if only they would return home to receive either.” The story made little effort to understand the hippies on their own terms, though it finally conceded that they “have not so much dropped out of American society as given it something to think about.”

By this time, the hippie story was fixed. Its weirdness worried mainstream Americans, especially parents, even as it attracted more young people to San Francisco that summer. Some in the Haight welcomed that influx on the theory that more turned-on people would change the world for the better. But for the local arts and music community, it was overwhelming. Most of the new arrivals brought little talent or skill to the mix, and the Grateful Dead’s Jerry Garcia later described the result as an ecological disaster. The Summer of Love raised the music scene’s profile and launched many careers, but the party was over, and the Haight quickly slipped into squalor.

As summer turned into fall, those who remained in the Haight accused the media of creating the scene it purported to describe. In October, the Diggers performed the “Death of Hippie” event; pall bearers carried a coffin with the words “Hippie—Son of Media” on the side. The same month, the Grateful Dead were arrested for marijuana possession at their home on 710 Ashbury Street. In his press statement, manager Danny Rifkin reinforced the Diggers’ message. “The mass media … created the so-called hippie scene,” Rifkin said. That scene depended on “the long-haired dropout who performs his exotic rites for the convenience of visiting cameramen.” That ritual, in turn, encouraged police officers to arrest young people who fit the description. Rifkin concluded that the drug law was a lie, and that “the hippie, as created by the media, is a lie as well.” 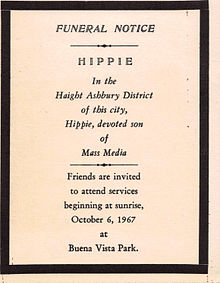 One enigmatic comment on this period came from a 1970 interview with Jerry Garcia. “Today there is no place without its hippies,” he said. “No place.” He understood that outcome as a cultural victory that paradoxically began and ended during this era. “I think that the revolution that’s going to make some sort of dent or some change is already over,” Garcia said. “It’s already happened in principle, and the waves of it are now moving away from ground zero at a rate of about, you know, a mile every four years or something like that.” The revolution that mattered, he suggested, was already complete and inviolable. “It’s already gone, it’s already past,” Garcia said, “and the rest of it is like telling everyone who missed it that it’s already happened.” Almost a half century later, Garcia’s sense of cultural inevitability seems oddly plausible.