December 9, 1968 was one of the most significant days in personal technology history. On that day, computer scientist Douglas Engelbart demonstrated experimental computer technologies that 40 years later would become ubiquitous in homes and workplaces around the globe. During the “The Mother of All Demos,” as it would later be known, Engelbart’s live demonstration, at the Fall Joint Computer Conference in San Francisco, featured the introduction of the computer mouse as well as video conferencing, teleconferencing, word processing, and hypertext—many of the tools that would define personal computing and social networking decades later. Engelbart’s presentation was the first to publicly demonstrate all these elements in a single system, then called the “oN-Line System” or, NLS. 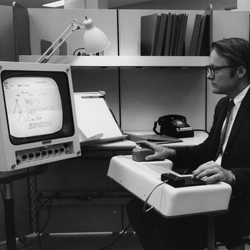 Engelbart’s demonstration showed that computers could be used for complex group communications over long distances and for the enhancement of individual and collective learning. The demonstration was highly influential and spawned similar projects at Xerox PARC in the early 1970s, and influenced both the Apple Macintosh and Microsoft Windows graphical user interface operating systems in the 1980s and 1990s.

Part of the demonstration was controlled, in part, by researchers at the Augmentation Research Center at Stanford Research Institute (SRI) in Menlo Park, CA about 30 miles South of where the live demonstration was held. Englebart’s system was linked via telephone lines and microwave channels to a terminal at SRI. The video production of the SRI end of the demonstration was led by a non computer scientist by the name of Stewart Brand. A few months earlier, Brand had launched the Whole Earth Catalog, a publication that helped provide tools and connectivity to people living on communes around the country.

As Fred Turner notes in From Counterculture to Cyberculture:

“…Like the NLS system, the Catalog would link multiple, geographically distributed groups and allow them to collaborate—albeit not in real time. And like the hyperlinked texts of Engelbart’s system, the Whole Earth Catalog presented its readers with a system of connections. In the Catalog, no text stood apart from every other; each was part of an informational or social system, and each offered a doorway through which the reader could enter one of those systems…”

Nearly three years before “Mother of All Demos,” Brand had helped launch the hippie counterculture era by heping produce the three-day Trips Festival, a three-day acid test/music/performing arts extravaganza that, according to Tom Wolfe in The Electric Kool Aid Acid Test, kicked off “The Haight Ashbury Era.”

The fact that Brand was part of the Trips Festival and, then, part of the SRI lanch of the NLS system is quite symbolic of the links between the counterculture and the rise of the personal computer and internet technologies. As Turner details in From Counterculture to Cyberculture and John Markoff notes in What the Dormouse Said: How the Sixties Counterculture Shaped the Personal Computer Industry,the personal computer and early internet technologies were created by innovators and scientists influenced by the free-thinking hippie counterculture spirit that reached its apex in late 1960s and early 1970s in the Bay Area. Stewart Brand touches upon this below:

Perhaps most significantly, Brand, who found himself part of the teams behind the Trips Festival and SRI demonstration, is credited as a major influence on Steve Jobs and his early vision for Apple Computer. As noted in Cult of Mac, Jobs often cites the impact of the Whole Earth Catalog on his thinking. During Jobs’ famous commencement address at Stanford University in 2005, he referred to Brand’s publication as “Google, in paperback form” in terms of importance, and referenced its mantra of “Stay Hungry, Stay Foolish.”

Read more about the “Mother of All Demos” and Stewart Brand below: