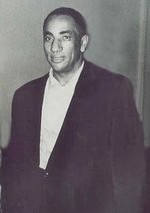 Fifty years ago today, August first 2016, businessman and music promoter Charles Sullivan died in San Francisco. His death remains a significant and controversial mystery. However, what is undeniable is that Sullivan played a critical role in San Francisco’s cultural life during the mid-1960s and paved the way for some of the most significant music events in California history.

Sullivan was born on a farm in Monroe County, Alabama, but ran away at the age of thirteen. Making his way to California, he arrived in Los Angeles in 1928 at the age of eighteen, and washed cars while going to night school to become a machinist. He worked his way up to the position of journeyman machinist, only to be refused admission to local unions because he was black so he came to San Francisco at the height of the Great Depression. When Sullivan found Northern California unions also closed to minorities, he began working as a chauffer and mechanic for George Nicholls, Jr.—a Hollywood film director living in Hillsborough.

He and his first wife, Iola, scrimped and saved for six-odd years, and opened a hamburger stand in San Mateo in 1939. He soon purchased a bar in Pacifica for $7,000 solely to acquire its liquor license and expand Sullivan’s Cafe. Sullivan was getting his first taste of success, but not everyone was pleased with his triumph. San Mateo residents initially petitioned City Hall to block the transfer of the liquor license. Sullivan claimed the move was motivated purely by racism.   Ultimately, Sullivan prevailed and, in June of 1944, he was issued a permit to put a “dark room” in his pool hall and café. He expanded Sullivan’s to include a card room, becoming the first black man to own a gambling license on the Peninsula, and set his sights on opening a “colored USO” to accommodate America’s unserviced servicemen.

In addition to the aforementioned enterprises, he also worked as a machinist in the shipyards throughout the World War II—allegedly admitted to a union that previously refused him following the personal intervention of President Roosevelt. With his Café running soundly, he opened a jukebox rental business called Sullivan’s Music Co., and later rented cigarette vending machines. Soon, the son of illiterate Alabama farmers was living in a comfortable two-story house near Alamo Square in San Francisco.

In the city, Sullivan continued his reign of success and earned the nickname “Mayor of the Fillmore.” The Fillmore was a bustling neighborhood in San Francisco’s Western Addition district that would soon be known as “Harlem of the West” for its numerous jazz clubs and African-American businesses. Sullivan bought the Booker T. Washington Hotel and also acquired a liquor store, renting rooms above in his newly renamed Sullivan Hotel. In 1949, a local musician named Slim Gaillard borrowed money from Sullivan to open a chicken and waffles joint. Named Vout City, the club and Gaillard were immortalized by Jack Kerouac in On The Road; in the novel, Kerouac recalled “a little Frisco nightclub” where “great eager crowds of young semi-intellectuals sat at his feet and listened to him on guitar, piano and bongo drums…he does and says anything that comes to his head.”

When Gaillaird chose greener pastures in Los Angeles, Sullivan convinced John “Jimbo” Edwards—the first black car salesman working in downtown San Francisco—to take over the joint. Sullivan paid the first three months of his rent to help establish him, and Edwards opened Jimbo’s Waffle Shop. Local musicians would come by for food after shows downtown and an unused room in the back soon became a well-known jam space. To capitalize on this, Edwards installed a stage, brought in a piano, and renamed the spot Bop Cityafter a recently closed club by the same name in New York City. Local musicians came by  after work and shared the stage with big-time acts like Miles Davis, Dizzy Gillespie, Charlie Parker, John Coltrane, Ella Fitzgerald and Billie Holliday thanks to Edwards’ friendship with big band leader Billy Eckstein.

Sullivan had the Midas touch. In 1952, he became the master lease-holder of The Ambassador Dance Hall at 1805 Geary Boulevard. By the 1950s, The Ambassador had already been through many changes. Built in 1912 as an Italianate-style dance hall by Emma Gates Butler, it was originally known as the Majestic Dance Hall & Academy and the venue hosted socials and masquerade balls. The name changed to the Majestic Ballroom and then the Ambassador Dance Hall, which hosted big bands in the 1930s, and was operated as a roller rink from 1939 through 1952. Throughout the venue’s lifespan, “people of color” were allowed to perform at but not to attend the shows until Sullivan took over the lease, and changed the name to something more familiar to contemporary concertgoers, something that better reflected the neighborhood: The Fillmore Auditorium.

Although he did very little to promote The Fillmore, distributing a few handbills in the neighborhood and running a short commercial on black radio station KSOL, he drew a huge, integrated audience. He wore a suit and tie every day, and insisted that his performers always looked sharp—often picking up their suits after shows to personally ensure they were cleaned and pressed for the next. In addition, he was known to carry a large roll of cash in this pants pocket to use “whenever he needed to take care of somebody.” He booked the biggest and brightest acts of the era, from James Brown to Ike & Tina Turner—whose band included a young guitarist named Jim James, known better today as Jimi Hendrix. But jazz was on the way out by the 1960s, and venues began to close as audiences swayed towards electrified rock-n-roll. The Fillmore District was also changing as the city moved forward with drastic redevelopment plans that would decimate the physical and cultural landscape in a few short years. 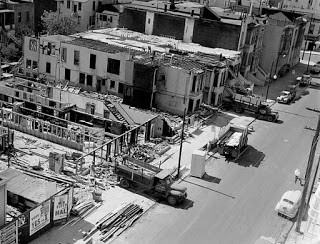 To stave off both of these encroaching forces, Sullivan, the Mayor of the Fillmore, allowed white promoters to use his venue in the hopes that it would save the building from redevelopment. In December 1965, Sullivan allowed an up-and-coming promoter named Bill Graham the use of his dance hall license to hold a benefit for the San Francisco Mime Troupe at The Fillmore. A success, Sullivan thereafter allowed Graham to book the venue’s off nights along with another promoter, Chet Helms—a generous act that effectively started a legendary Bay Area rock music rivalry. However, residents of the neighborhood took issue with the new music these new promoters brought to the neighborhood, and Sullivan encouraged Graham to apply for his own license under pressure from officials who, in turn, encouraged Sullivan to stop subleasing The Fillmore. In early 1966, Graham and Sullivan came to an agreement: Graham secured a contract for all open dates at The Fillmore that year, and a four-year lease option on the Auditorium if anything unforeseen happened to Sullivan.

On August 1st of that year, Sullivan returned to San Francisco from Los Angeles with $6,000 in receipts from a Southern California gig. After driving a female companion home to Oakland, Sullivan crossed the bridge and exited the freeway in San Francisco at 5th Street, instead of taking Fell Street to his west side home. For reasons unknown, he turned left into what was then an industrial district, and was never seen alive again. Charles Sullivan was found shot to death in the early morning hours of August 2nd, sprawled on the street next to his rented Chevy near 5th and Bluxome Streets. The car headlights were left on, his empty valise and keys were found in the open trunk, and Sullivan had a single .38 through the heart—the gun resting on the ground beside his hand. Finding a black man dead from a weapon still on the scene in South of Market, the San Francisco Police ruled Sullivan’s death a midnight suicide. The City coroner ruled it a 2:00am homicide, and Sullivan’s wife, Fannie, and brother, Marion, believed he had been robbed and murdered for the contents of his valise: the missing $6,000; although, newspaper reports at the time noted the police later found the missing cash. Other acquaintances of Sullivan agreed with the family and City coroner, and stated Sullivan was too selfish to commit suicide.

To this day, the case remains unsolved. Homicide inspector Jack Cleary stuck with the suicide theory, despite Diane Feinstein’s attempts to convince him otherwise. The African-American newspaper, Sun-Reporter, assigned Belva Davis to investigate the story, and she was told that powerful interests were behind Sullivan’s murder…before she was pulled of the story and the newspaper stopped covering it. Sometime later during a raid of Marion Sullivan’s speakeasy, a participating police officer made the family connection and told Marion he knew who killed his brother, but Marion was too afraid to follow up on the officer’s claims.

So what happened to Charles Sullivan? Perhaps the better question is: what wouldn’t have happened without Charles Sullivan? Without Charles Sullivan, San Francisco would have been short a few essential after-hours jazz clubs, and Jack Kerouac may never have been inspired to stay and think and write his signature bop prosody. The Majestic Ballroom might have remained a derelict (and segregated) roller rink, certainly wouldn’t have been renamed The Fillmore Auditorium, and would never have given rise to “The Fillmore Sound” that became synonymous with the Summer of Love. For a man who ran a dozen eponymous businesses and was crowned the Mayor of the Fillmore, very little is left to mark his presence on the neighborhood—largely due to the San Francisco Redevelopment Authority’s wrecking ball. The Fillmore survived a stint as a Black Muslim Temple and a punk club called The Elite before the Sullivan name was restored but associated with one of the most famous names in rock and roll. Graham always credited Sullivan with paving the way for his success. “Had that not happened, I would have done anything Charles wanted,” Graham said. “Just out of gratitude.”