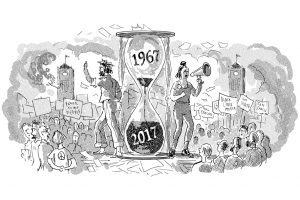 The “Summer of Love” turns 50 this year. The hippies who flocked to San Francisco with flowers in their hair are now aging boomers who have long given up LSD for statins and blood pressure pills. Today’s youth couldn’t tell a hippie from a Yippie, though they may have heard, vaguely at least, of the yuppies, a later species from whom they are more directly descended.

Will the ’60s ever end? Ever since the ’60s we’ve been debating the ’60s. With the recent bursts of rioting and student activism at Berkeley, Yale, Middlebury, Claremont McKenna, and across the country, even today’s millennials and post-millennials (Generation Z, as they’re called, perched on the very alphabetic cliff) find themselves drafted into nostalgic comparisons with their grandparents’ generation.