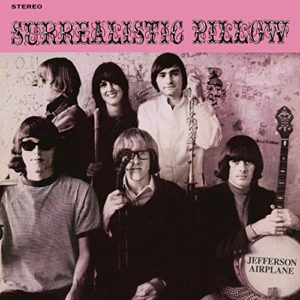 On February 1, 1967, Jefferson Airplane released its second album, Surrealistic Pillow.  The rock music world, particularly in San Francisco, would never be the same. The album, the first to feature Grace Slick (and drummer Spencer Dryden), included two of the most famous songs in rock music history: White Rabbit and Somebody to Love. The album shot to number #3 on the Billboard charts in 1967. It is now known as as one of the most important rock music albums of all time.

As Bay Area music critic Jim Harrington recently noted, the “album stands as the most fully realized vision of the fabled ‘San Francisco Sound,’ a colorful, swirling dose of psychedelic rock that mesmerized a nation of young men and women and signaled the dawn of a new era in music.” Longtime San Francisco rock music critic, Joe Selvin,  “(t)hat was the real album of the Summer of Love.”

Below are several articles and reviews of Surrealistic Pillow: