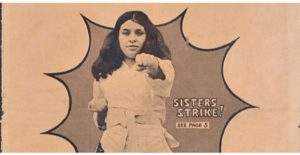 By the fall of 1967, I wallowed in an image of myself as a struggling 23-year-old all-but Ph.D. betrayed by a cheating husband. To escape, I fled my temporary, pot-dealing boyfriend, my Communist Party parents, the spouse I had discovered in bed with another woman, and my hometown of Toronto, to attend a sociology conference in San Francisco. The City stopped me cold. I had moved from frozen Canadian gray to Technicolor: sunshine warmed my face, trees bloomed, red cable cars clattered, a street vendor hawked orange and blue-glass pot pipes beneath a Macy’s window stocked with multi-colored paisley jackets. I believed then, and do today, that human beings are born to serve not just their own self-interest, but the greater good. Outside the downtown Hilton Hotel, I was amazed to see a picket line of professional women in skirts, and men in ties and jackets, holding placards that read: To oppose evil is the moral obligation of a true scholar. Peace Now! Peace Now!

When I walked into a windowless room at my Sociology conference that September of 1967, I also stepped onto a road to a brave, new life. I arrived just in time to hear a woman with curly red hair declare,

“Free love is the politics of sexual pleasure and personal happiness.”

I had no inkling an event called the Summer of Love had just passed. I recall only that I wished I could inscribe the words “free love” as a rainbow above my head. Free love meant I did not need anyone’s permission to satisfy my bodily desires with whomever I wanted, undeterred by cheating husbands and my mother’s Victorian morality. I could create a future for myself that would be both sexually gratifying and, I decided in deference to my communist upbringing, happily socialist. I would take to heart the red-headed graduate student’s advocacy of free love but combine it with resistance to a straight-jacketed world.

Idealism is central to political activism, and romantic relationships can emerge out of political involvement. I emigrated to Berkeley in December 1967, where I discovered to my delight that my hometown was an epicenter of hippie counterculture, free love, free speech, and anti-war protest. I had found a community in which I felt comfortable – one committed to creating a just, unfettered way of life.

In Berkeley, I embarked on a quest for political free love. It began badly. I narrowly escaped being sexually assaulted. This occurred at a party put on by a Bay Area neo-communist group, whose leader had accepted Mao Tse Tung as his personal savior. In addition, for the first but by no means last time, my close encounter with that group brought me to the attention of the FBI. I learned a critical lesson: avoid any group – or individual – who parrots a hard politically correct line.

I next attended a meeting on the Berkeley campus to support seven draft age men who faced jail for attempting to shut down the Oakland Induction Center. There I met and quickly fell in love with a blond, blue-eyed apparition named Stew Albert, an anarchistic Yippie and writer for the Berkeley Barb. Luckily for me, Stew had two best friends: Yippie founder Jerry Rubin and Eldridge Cleaver, Minister of Information of the Black Panther Party.  I learned from all three what it meant to be a revolutionary.

The movement in which I came of age in the aftermath of the Summer of Love was also macho, misogynist and heterosexist: straight, mostly white men got their way, the rest of us were secondary. Still, I discovered there a principle that guides me to this day: to fight for freedom gives you life, anything less is a death. With that, I forged my own identity as an independent, self-determining woman. I am and will be forever grateful to both political protest and free love for showing me the way.

Judy Gumbo is an original Yippie, one of the few female members of that theatrical protest group who levitated the Pentagon to stop the Vietnam War, brought the New York Stock Exchange to a halt to satirize greed and ran a pig for President at the 1968 Democratic Convention. She went on to become an activist at People’s Park, a founder of an early Berkeley women’s group, and a writer for the Berkeley Barb and the Berkeley Tribe. In 1970 Gumbo visited the former North Vietnam while the war still raged. She is honored that, in 1972, the FBI said about her: “The subject JUDY GUMBO is considered to be the most vicious, the most anti-American, the most anti-establishment, and the most dangerous to the internal security of the United States.”

In 1975, Gumbo discovered a tracking device on her car. She subsequently sued the U.S. Government to successfully challenge warrantless wiretapping. Judy has a Ph.D. in Sociology and spent most of her professional career as an award-winning fundraiser for Planned Parenthood. She is also a double widow: of Yippie founder Stew Albert and of David Dobkin, a founder of Berkeley Cohousing. Judy and Stew’s book, The Sixties Papers, is recognized as a pioneering work that lets the 1960s speak for itself. Judy’s publications, blog, interviews and life choices marry the fun-loving spirit of the Yippies with the courage to confront the world we live in and ourselves. Find her at her website www.yippiegirl.com , on Facebook under Judy Gumbo Albert and Yippie Girl, and follow her @JudyGumbo on Twitter.