Prepare yourselves to see a lot of Stanley Mouse’s work during the forthcoming 50th Anniversary of the Summer of Love. This notable 1960s artist will be well-represented in exhibitions all over the Bay Area and beyond in 2017, but do you know the story behind this legend’s most iconic work, displayed 50 years ago this very evening?

Born Stanley George Miller in California in 1940, this son of a Disney animator spent his formative years in Detroit, Michigan absorbing the city’s Motown and Motor City cultures. He was a quiet kid who often drew in class, earning him the nickname of “Mouse” in seventh grade, and his first taste of fame came from Detroit’s hot rod community, which was wild for his signature “Mouse pin-striping.” This led to T-shirts, and graffiti art, the latter of which prompted his expulsion from Mackenzie High School. He spent a year at Cooley High School, and then finished up at the Art School of the Detroit Society of Arts and Crafts—known nationally as the school that recognized the automobile as an artform.

According to Mouse’s biography, “he dropped out to follow a higher calling to do rock posters in San Francisco during the sixties wartime era of social revolution, political passion and musical innovation.” His return to California in 1965 sent his art on a new trip. There he met Alton Kelley, then affiliated with The Family Dog, and the pair began producing rock posters for Chet Helms shows at the Avalon Ballroom. Mouse liked working with other artists—a penchant he refers to as one of his “Libra traits”—and this began a collaboration that would last into the 1980s. 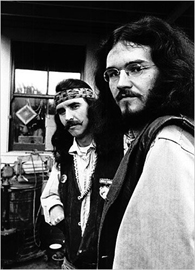 Mouse’s hand, trained from years of t-shirt designing and hot rod striping, and his love of Art Nouveau combined well with Kelley’s of-the-moment style and keen eye for layouts. The two most-remembered Mouse and Kelley collaborations are counterculture complimentary: a play on the ZigZag man familiar to denizens of cigarette rolling papers, and a poster for one of the most famous rock ‘n’ roll acts of all-time. In 1966, the pair were commissioned to make a poster for a show featuring The Grateful Dead. For this band they’d never heard of, Mouse and Kelley first designed a sheet that incorrectly spelled the band’s name as “Greatful Dead;’ for their second attempt, they went to the San Francisco Public Library for inspiration. Mouse recalled: “We would go to the San Francisco library and peruse the books on poster art. They had a back room full of books you couldn’t take out with great references. We were just going through and looking for something. And found this thing and thought, ‘This says Grateful Dead all over it.’” What Mouse found was The Rubaiyat of Omar Khayyam.

Omar Khayyam was a Persian poet, mathematician and astronomer who lived from 1048-1131, and a rubaiyat is a form of poetry (a quatrain rhyme)—hence The Rubaiyat of Omar Khayyam. The translation best known to English-speakers and found by Mouse and Kelley was done by Edward FitzGerald and illustrated by Edmund Joseph Sullivan, with five editions published from 1859 to 1889 that were more interpretive than they were literal. Mouse was particularly drawn to a Sullivan illustration that accompanied Verse 26, and couldn’t leave it behind. “I hate to say this,” Mouse recalled, “but Kelley cut it out with a pen knife. I always say that we Xeroxed it, but there weren’t Xerox machines then. I finally found it about two years ago, the actual cut-out piece, and I went, ‘Oh, my God’… And the poem that goes with this illustration is fantastic. It’s short and sweet and had to do with wine, women and song.” A perfect match for The Grateful Dead sound.

The verse that accompanied the poster’s inspiration was ripe with symbolism for artists marketing to Flower Children. “Oh, come with old Khayyam, and leave the Wise / To Talk; one thing is certain, that Life flies; / One this is certain, and the Rest is Lise; / The Flower that once was blown for ever dies.” Although Mouse’s interpretation of the verse’s meaning might be as liberal as FitzGerald’s “transmogrification” of Khayyam’s original quatrains, it does make a great story and the poster hit its mark—becoming an everlasting icon for both Mouse and the band it advertised. 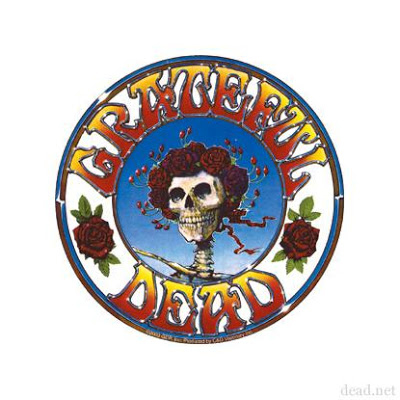 Stanley Mouse continues to create and sell art through Mouse Studios, and The Dead (or what remains of The Dead) are miraculously still touring. As for this visual piece of rock history, it continues to be appropriated by local apparel manufacturers who shall not be named, and, more importantly, will be given a prominent place in the de Young Museum’s Summer of Love exhibition coming in April of 2017. Be sure not to miss it.