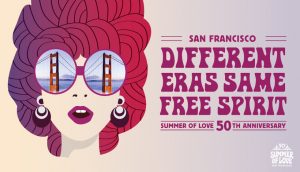 It’s 50 years since the Summer of Love, that incandescent Roman candle of creativity and excess that cast an unforgettable light over the rest of the 1960s and the counter-culture which not only marked that fateful decade but which also echoes down through the past half-century.

And San Francisco, ground zero of the Flower Power explosion, is playing the anniversary to the hilt. A big exhibition at the city’s DeYoung Museum in Golden Gate Park, where so many major cultural events have taken place, has just concluded its run. It’s no coincidence that the Trumpist alt-right tried — and notably failed — this past weekend to provoke violent counter-demonstrations with a deliberately provocative but ultimately belly-flopping rally in the City by the Bay.