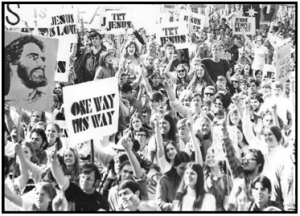 The Jesus People, born on Haight Ashbury, had a profound influence on the Religious Right.

They came to San Francisco seeking something more — something significant, something transcendent. By the summer of 1967, a half-century ago this year, nearly 100,000 hippies and counterculture kids had gathered in the Haight-Ashbury neighborhood to drop acid, indulge in free love, and escape the confining strictures of their middle-class upbringings. They wanted to join the revolution.

Yet the utopia called the Summer of Love wouldn’t last, and, after the movement faded out, not all of them went back to professional career paths. Disillusioned by bad trips and a sense that their pursuit of hedonism had been empty, thousands of burned out hippies soon experienced something possibly even more revolutionary than tuning out and turning on: a born-again religious conversion.